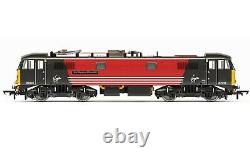 Virgin Trains, Class 87, Bo-Bo, Electric Locomotive 87019'Sir Winston Churchill. The Class 87 locomotive design resulted from a requirement for a more powerful mixed traffic electrical locomotive by British Rail, needed to cope with the route gradients of the West Coast Main Line between Weaver Junction and Glasgow. Electrification had been newly authorised over this section in 1970 and was scheduled for completion by May 1974, leaving little time to design a completely new locomotive from scratch and so British Rail decided to base the new class on the existing Class 86 locomotives.

The British Railways Board placed an order for thirty four locomotives, later to be increased to thirty six, with British Rail Engineering Ltd at Crewe, GEC Traction providing the electrical equipment. Designed from the outset to work in pairs, as well as in parallel with the Class 86 fleet, the Class 87 was broadly similar to the Class 86 in terms of layout and styling, but mechanically it was a very different. The first locomotive, 87001, entered traffic in June 1973, the remainder of the fleet being deployed in the general West Coast pool as they entered service, operating Euston to Preston services as the WCMLs electrification spread north.

On April 22, 1974 the new West Coast Electric Scot service was introduced, marking a major launch for the class and journey times from London-Glasgow were cut to just five hours. When British Railways reversed its locomotive naming policy in 1977, the class were given the generic title of Royal Scot and named from a selection of famous steam hauled predecessors. Following complete privatisation in the mid-1990s, Porterbrook leasing took over ownership of the fleet, but the introduction of the Pendolino trains led to the Class 87s being withdrawn from the core InterCity routes and complete withdrawal began in 2003, with 87016 being the first to be dismantled in November 2004. The last mainstream locomotive hauled service took place on June 10, 2005 and Porterbrook began to look at how best to employ the locomotives, spells with DRS, Cotswold Rail and First GBRf ensuing. The fleet, not being fitted with On Train Monitoring and Recording (OTMR) could not operate beyond January 1, 2008 and were finally withdrawn from service, some going to Bulgaria between 2008 and 2012.87019 Sir Winston Churchill was built at Crewe, entering traffic in March 1974 allocated to Willesden depot.

Named as Sir Winston Churchill in May 1978, the name was removed when the locomotive was repainted into an L&NWR lined black livery during March 2005 and renamed as ACoRP Association of Community Rail, a name it carried until July 2006 when the locomotive was withdraw. The item "Hornby R3656, OO gauge, Virgin Trains, Class 87, Bo-Bo, 87019'Sir Winston Church" is in sale since Monday, December 16, 2019. This item is in the category "Collectables\Model Railways & Trains\OO Gauge\Locomotives". The seller is "alongclassiclines" and is located in Manchester.