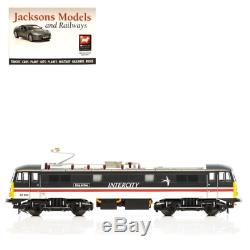 Hornby R3582 BR Intercity Class 87 Bo-Bo 87010 King Arthur OO Gauge. The Class 87 locomotive design resulted from a requirement for a more powerful mixed traffic electrical locomotive by British Rail, needed to cope with the route gradients of the West Coast Main Line between Weaver Junction and Glasgow. Electrification had been newly authorised over this section in 1970 and was scheduled for completion by May 1974, leaving little time to design a completely new locomotive from scratch and so British Rail decided to base the new class on the existing Class 86 locomotives.

This item is in the category "Collectables\Model Railways & Trains\OO Gauge\Locomotives". The seller is "gjcorgi" and is located in UK.