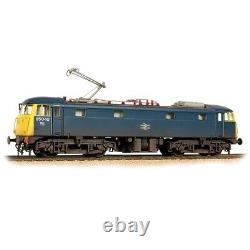 The British Rail Class 85 is a 25kV overhead AC electric locomotive built during the early 1960s, as part of BR's policy to develop a standard electric locomotive during the electrification of the West Coast Main Line and its associated urban networks. Five prototype classes (81-85) were built and evaluated, the most successful being the 40-strong Class 85 which led naturally on to the development of the 100 Class 86'standard' locomotives. Forty of these locomotives were built from 1961-64 by BR at Doncaster Works. The class hauled trains on the newly electrified West Coast Main Line, from Birmingham, to Crewe, Manchester Piccadilly, Liverpool, and later Preston.

By 1965, electrification had spread south to London Euston. Under the earlier BR classification, the type was given the designation AL5 (meaning the 5th design of 25 kV AC locomotive), and locomotives were numbered E3056-E3095. In 1968, this was changed to Class 85, when BR introduced the TOPS numbering system.

From 1971 onwards, locomotives were progressively renumbered into the 85001-040 series. The item "Bachmann 31-678A OO Gauge Class 85 85040 BR Blue Weathered" is in sale since Wednesday, October 21, 2020. This item is in the category "Collectables\Model Railways & Trains\OO Gauge\Locomotives". The seller is "cheltenhammodels" and is located in Cheltenham. This item can be shipped worldwide.