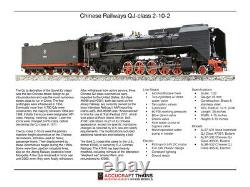 The QJ (a derivation of the Soviet LV class) was the last Chinese steam design to go into production and was the most numerous steam class to run in China. The first prototypes were introduced in 1956.

Eventually more than 4,700 QJs were constructed, the majority between 1964 and 1988. Initially the locos were designated HP-class, Heiping, meaning'peace'. Later the locos were changed to FD-class, before becoming the QJ-class in 1971. Their displacement by diesel locomotives began during the 1990s.

Some were then used on industrial lines, also on the Jitong Railway located in Inner Mongolia. A few QJs remained in minor use until 2003 when they were finally withdrawn. After withdrawal from active service, three Chinese QJ-class locomotives were imported to the United States.

QJclass #6988 and #7081, both last used on the Jitong Railway, are currently owned by the Iowa Interstate Railroad (AAR reporting marks IAIS). IAIS #6988 was "Americanized" in time for use at Train Festival 2011, which took place at Rock Island, Illinois. IAIS #7081 still retains much of its Chinese appearance, except for specific mandatory changes as required by U. The modifications included additional hand rails and installing a bell.

The third QJ-class that came to the U. Former #7040, is owned by R. The #7040 has been heavily modified, including removal of the distinctive "elephant ear" smoke lifters, and renumbered to #2008. Based QJ-class locomotives can be found in regular excursion service. 1:32 Scale / 45 mm Gauge.